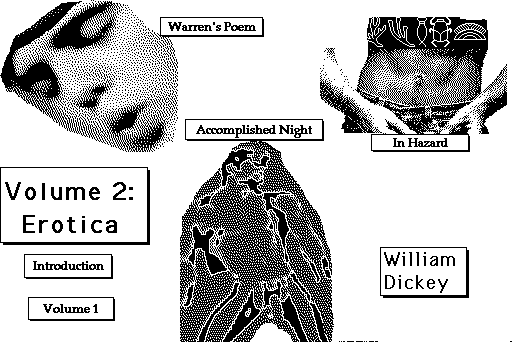 This item contains content some
may find inappropriate or offensive

Do not show me content advisories in the future

Some brief notes on reading and navigation:

William H. Dickey, who died in 1994, was born in 1928 and brought up in the Pacific Northwest. He was educated at Reed College, Harvard University, and the University of Iowa Writers' Workshop. Later, he was a Fulbright Fellow at Jesus College, Oxford University. He published fifteen books of poetry, including Of the Festivities, which was selected by W. H. Auden for the Yale Series of Younger Poets in 1959, More Under Saturn, which was awarded the California Silver Medal for Poetry in 1963, and The Rainbow Grocery, which won the Juniper Prize in 1978. He was also the recipient of the 1988 Bay Area Book Award, fellowships from the NEA, and a Creative Writing Award from the American Academy of Arts and Letters. In the Dreaming: Selected Poems was published by the University of Arkansas Press in 1994, and The Education of Desire appeared posthumously from Wesleyan University Press in 1996.

While a professor of English and creative writing at San Francisco State University in the 1980s, he became interested in the potential of early personal computers to expand the boundaries of poetry. The California Association of Teachers of English cited him as "Friend of the Machine."

Beginning in 1988, Dickey used the HyperCard software on his Macintosh SE to compose what would become fourteen "HyperPoems." None were ever published in his lifetime. Plans for a comprehensive posthumous edition (prepared for publication on floppy disk with technical and editorial assistance from Deena Larsen) ultimately went unfulfilled. With the exception of a small number included on a CD-ROM with The New Media Reader (MIT Press, 2002), the poems lay inert and unread and mostly forgotten until recovered from Larsen's laptop at the University of Maryland by Professor of English and Digital Studies Matthew Kirschenbaum in 2019.

The availability of the HyperCard Online emulator at the Internet Archive (in Dickey's own home city of San Francisco) finally offers us a platform. All fourteen of the HyperPoems appear here with the permission of Dickey's literary executor, Dr. Susan Tracz.

Most of the work appears to have been composed between 1988 and 1990. Integrating images, icons, animation, and sound effects with typography and text, the HyperPoems address many themes critics acknowledge as central to Dickey's print oeuvre: history, mythology, memory, sexuality, the barrenness of modern life, and (over and under all of it), love and death. But they also represent an important technical progression of his poetics, one with clear roots in the ideas about poetry he had forged through decades of mindfulness about the craft.

Three of the poems (those in Vol. 2) may fairly be called erotica, and represent unique documents of gay life in San Francisco at the height of the AIDS epidemic. They are certainly some of the very earliest (and most explicit) digital creative works by an LGBTQ+ author.

Even-or especially-at this late date, the HyperPoems are deserving of wide readership and promises to significantly augment Dickey's already rich literary legacy. The availability of the HyperCard Online emulator at the Internet Archive (fittingly in Dickey's home city of San Francisco) finally offers us a platform to present this important literary work to a public audience. Susan Tracz, Deena Larsen, and Matthew Kirschenbaum are grateful to the Internet Archive for making this possible (especially Jason Scott), and to Andrew Ferguson of HyperCard Online for his indefatigable and invaluable help with the emulation.

Uploaded by HyperCard Online on September 3, 2020